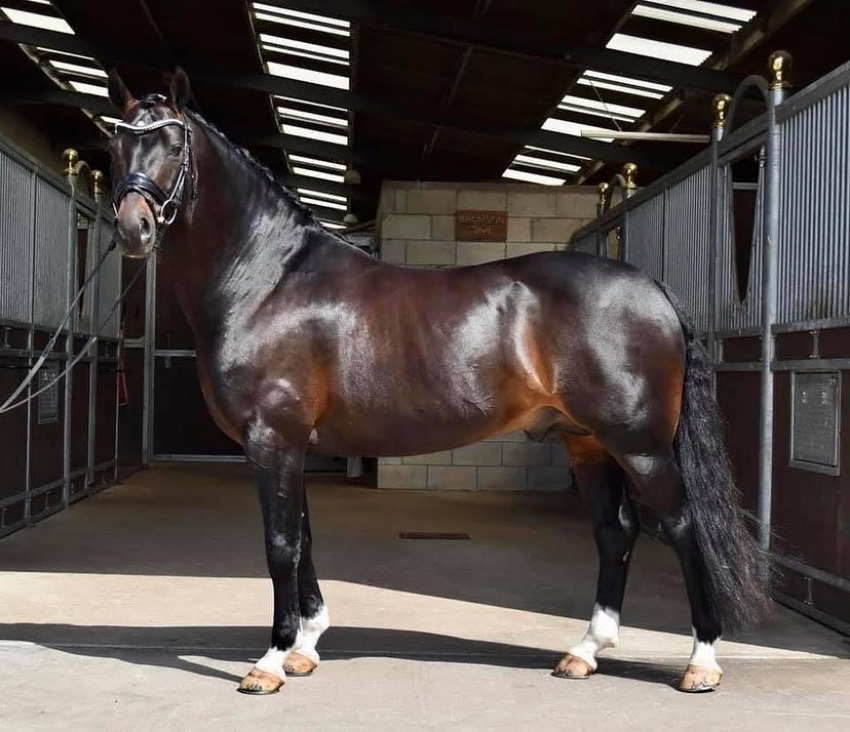 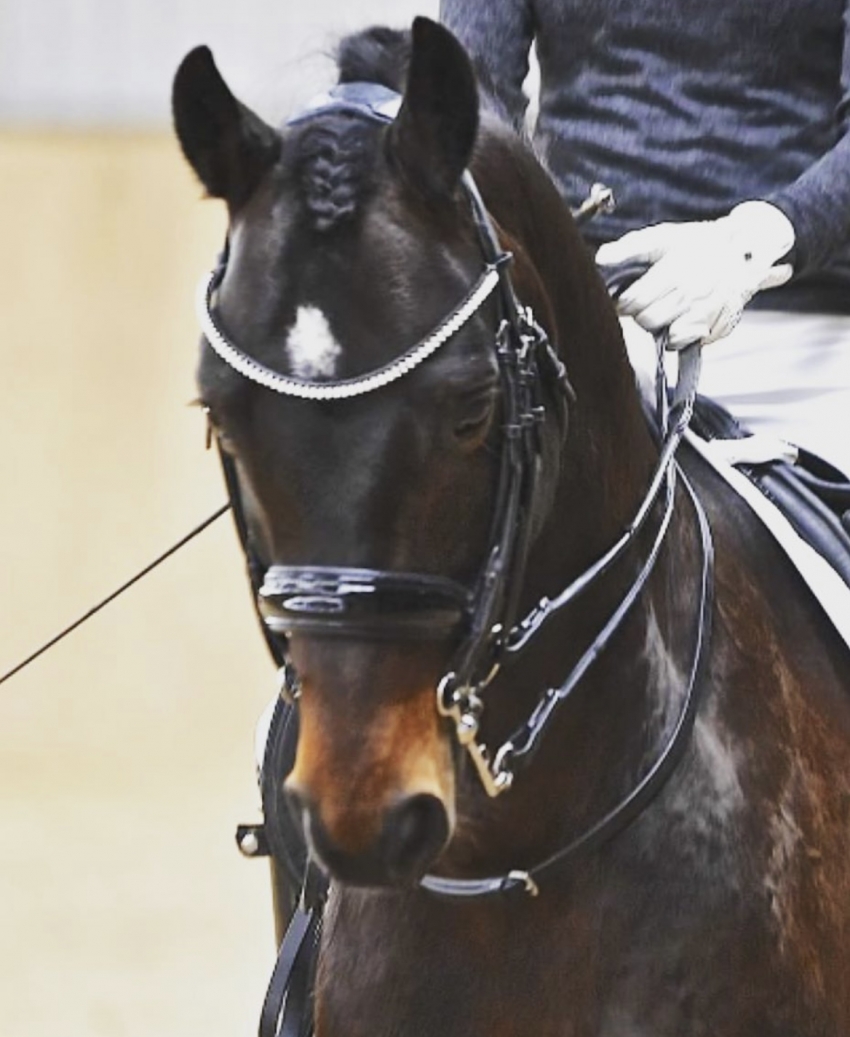 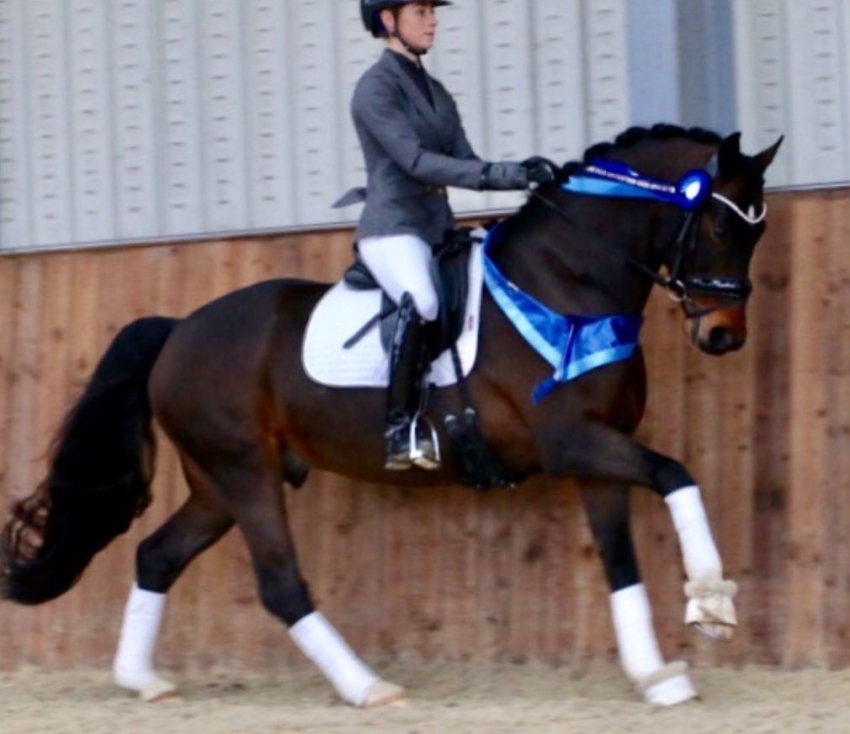 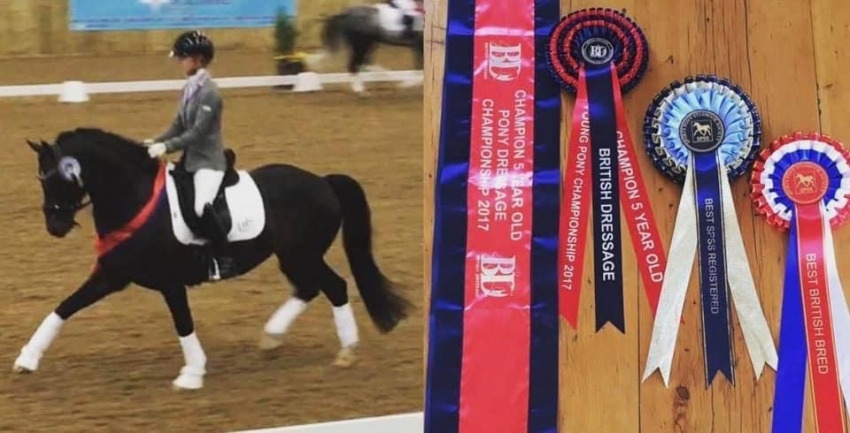 Woodlander Sir Gorgeous has an incredible pedigree, being bred by the one and only Lynne Crowden and his warmblood sire compliments his Welsh Section C dam lines to perfection. His performance is also outstanding as he was the BD 5 Year Old Young Dressage Pony National Champion 2017 with highest score over all age groups.

Sire: By the Sir Donnerhall stallion, Santana, who is from one of the best Hanoverian dam lines and boasts a fabulous cocktail of dressage performance blood. Santana scored 88.83% and placed 2nd in the Abbey Dressage Badminton Young Horse Qualifier for 4&5 year olds and also qualified for the Shearwater International by winning the Qualifier at the Welsh Festival.

Damsire: Synod Rum Punch was Champion at the Royal Welsh in 1999, his sire, Synod William, was Royal Welsh Champion 4 times and his grandsire, Menai Fury, was legendary as a crowd pleaser, sensational mover and influential sire. Synod William was also the sire of Synod Magnus the British Breeding/Ponies UK Top British-bred Dressage Pony 2007.

Sir Gorgeous, who gained an Elite Futurity Premium (Dressage) as a foal with a score of 9.12, began his BD career in 2016 as a 4 year old and already has a fantastic BD record, regularly scoring 70+%. He qualified for the 2016 British Dressage Young Pony 4 year old Championship winning the qualification class at Addington with judge Judy Harvey awarding him a 9 for his trot, 9 for attitude and 8.5 for his canter. He went on to become Reserve Champion at the Hartpury Festival of Dressage beating other top class ponies.

In 2017, Sir Gorgeous was:
Winter Regional Novice Champion
Wellington Premier League 5 Year Old Winner with a score of 8.3, including 9s for his trot, canter and attitude
BD 5 Year Old Young Dressage Pony National Champion 2017 with highest score over all age groups with 8.4 (Best British Bred and Best SPSS Pony)
This extremely talented stallion has been competing at Advanced Medium dressage since 2019, winning with scores of 70%+ and he is now succesfully competing at Prix St George!
​
Offspring/Breeding Advice
2017 was Sir Gorgeous’ first season at stud and his first foals were born in 2018, with one of them, Bromson Remarkable, gaining an SPSS GOLD Premium when evaluated as a foal. One of his 2019 foals, MM Sweet Pea also gained an SPSS GOLD Premium on her way to qualifying for the 2019 Elite Foals Final, where she was placed 3rd in the Sports Pony section. In 2020, 3 of his foals were presented for Virtual Futurity Evaluations and 2 gained Futurity Gold Premiums, with the other getting a Silver.