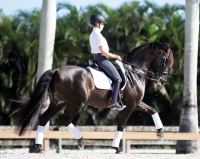 The American Hanoverian Society’s SSA is live, with an impressive 44 stallion listings! Follow this link to create your login and be ready for the excitement as the auction ends THIS WEEK on February 4, 2023 at 9 PM EST. You don’t want to miss out! ...read more 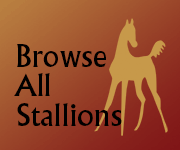 Check your inbox! The 2023 WSNA All Stallions Newsletter is out!

The 2023 WSNA All Stallions Newsletter is in your inbox! Browse the 130+ stallions on WSNA to find the perfect match for your mare this year. Click through to each stallion to learn more, and inquire for your 2023 breeding contract! ...read more

Welcome back for the next installment of our North American Stallion Owner Spotlight, with Ryan Pedigo Sport Horses of CA, USA! Getting a better look into the history, passion, and ambitions of the men and women working to progress the industry and help breeders understand the drive that cultivates warmblood breeding here in North America. Click to read on! ...read more

Warmblood Stallions of North America
created a survey of breeders in July/August 2014. The primary purpose was to find out how mare owners find stallions to breed to. There were also a couple of questions about
WSNA
specifically, to find out if, and how, breeders used our print magazine. Below is a synopsis of some of the most interesting survey results. 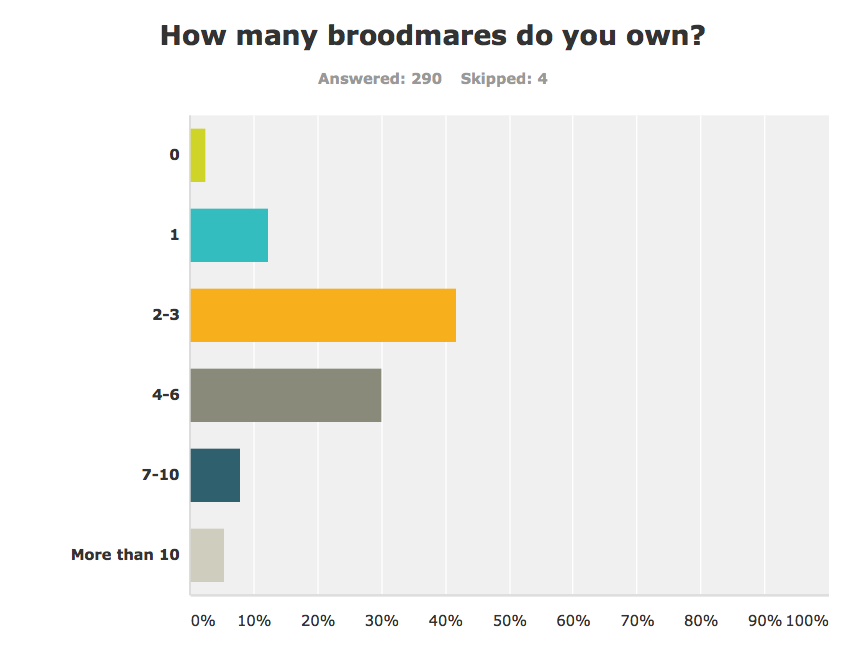 Registry participation
All but 6.76% responded that they belonged to at least one registry; 55% belong to multiple registries.
We asked how many of the breeder's own mares they bred in each of the last three years.
The percentage of breeders who bred none of their mares was between 28 and 29% each year. The average number of mares bred per breeder in 2012 was 2.18, in 2013 it was 2.25, and in 2014 it was 2.46.
When do you start choosing stallions for the next breeding season?
By far the greatest number of breeders checked "I'm always looking at stallions I might breed to." 87.23%
How important are the following criteria to you when choosing a stallion?
We asked about the criteria breeders are using to select stallions, and the bottom line is that breeders are considering everything. The most popular response was that the stallion be a good fit for a specific mare, but everything from bloodlines to quality of offspring was considered - including the reputation of the owner. 65.70% said that if the stallion was not a good fit for a specific mare, that would be a deal breaker. A stallion's show results, while "Fairly important" to 57.35%, was a deal breaker for only 10.66%. Conformation flaws, however, would be a deal breaker for 58.18%. Here are the full results:

How often have you become interested in a stallion as a result of seeing him in one of the following?
A number of the questions were asked to find out what resources breeders used to find stallions. Overall, breeders use a wide variety of resources. Surprisingly to me, the single biggest response (12.96%) said that "Saw the stallion's offspring in person" was "How I usually find stallions." Finding a stallion through the stallion's or farm's own website ranked highest, far higher than Facebook.
Resources, in order of importance by overall average rating:

About half said they use
Warmblood Stallions of North America
by making a list of stallions they like, then doing more research online or elsewhere.
Is the
WSNA
print magazine worthwhile?
77% of respondents felt that it was important for
WSNA
to continue, including 37% who checked "It would be great for the industry if
WSNA
grew to include every stallion standing in North America," and 40% who said that it was "Important" or "Very important" that
Warmblood Stallions of North America
continue as a print directory. Only 7% of respondents said that they don't think a print directory is of much value.
Summary
For stallion owners: Keep your website up to date. Breeders report the individual stallion/farm website to be the place they most often go for information about a stallion.
Encourage your mare owners to take your stallion's best foals to inspections. Seeing a stallion's offspring in person is very important to breeders, and inspections are a great way to get them out there.

For
Warmblood Stallions of North America
: Creating a print magazine is like breeding, in that it sometimes feels like a thankless job. Especially with the importance of the internet, do people really use
WSNA
and want it to continue? It appears that they both want it and use it.

In the olden days, print magazines were all we had. If you had a mare and you liked a stallion, you'd wait for the Chronicle's stallion issue to come out. If you liked a stallion, you'd call the owner and ask them to send you a video tape. Sometimes you had to pay a deposit for it. No one calls a stallion owner directly from a print ad these days, which sometimes makes it seem like breeders are not using print magazines. Magazine publishers in all fields are asking themselves, "Why are we still doing this?" Many are quitting.

From this survey, it's clear that print ads in
WSNA
are still seen and used by most breeders, but they are used differently. The majority of our respondents note the stallions they like and then do further research online. Today, a print ad is a jumping-off point. It's also a long-term record. Websites can disappear, but breeders keep
Warmblood Stallions of North America
around for months and even years.

Thank you to all the breeders who took this survey. Thanks to all the wonderful people who wrote in special comments about how much
Warmblood Stallions of North America
means to them.
Here are a few comments submitted through the survey:
I think it is very important that we start appreciating our American-bred horses and the amazing stallions we have right here in the US.
WSNA
helps to promote that.
Very happy with it as a resource and would love to see it get even better and bigger.
This directory is a great resource. I find that sometimes I narrow myself too closely within the breed that I like the most and in doing so I have limited myself to not even knowing what else is out there. This year I ended up breeding my mare outside of my primary registry because I liked the stallion so much. It is nice to see stallions from all registries in the pages of the same resource. It makes it really easy to compare based on not only registry but also bloodlines.
Support our breeders and businesses
Click any banner to learn more


<
>
Support our breeders and businesses
Click any banner to learn more